1. A hypothesis as political fiction: the explosion of inequalities and the denial of climate change are one and the same phenomenon
2. Thanks to America’s abandonment of the climate agreement, we now know clearly what war has been declared
3. The question of migrations now concerns everyone, offering a new and very wicked universality: finding oneself deprived of ground
4. One must take care not to confuse globalization-plus with globalization-minus
5. How the globalist ruling classes have decided to abandon all the burdens of solidarity, little by little
6. The abandonment of a common world leads to epistemological delirium
7. The appearance of a third pole undoes the classical organization of modernity torn between the first two poles, the Local and the Global
8. The invention of “Trumpism” makes it possible to identify a fourth attractor, the Out-of-This-World
9. In identifying the attractor we can call Terrestrial, we identify a new geopolitical organization
10. Why the successes of political ecology have never been commensurate with the stakes
11. Why political ecology has had so much trouble breaking away from the Right/Left opposition
12. How to ensure the relay between social struggles and ecological struggles
13. The class struggle becomes a struggle among geo-social positions
14. The detour by way of history makes it possible to understand how a certain notion of “nature” has immobilized political positions
15. We must succeed in breaking the spell of “nature” as it has been pinned down by the modern vision of the Left/Right opposition
16. A world composed of objects does not have the same type of resistance as a world composed of agents
17. The sciences of the Critical Zone do not have the same political functions as those of the other natural sciences
18. The contradiction between the system of production and the system of engendering is heating up
19. A new attempt at describing dwelling places – France’s ledgers of complaints as a possible model
20. A personal defense of the Old Continent

Tesis yang diusung Latour dalam buku ini berbunyi kurleb:
The hypothesis is that we can understand nothing about the politics of the last 50 years if we do not put the question of climate change and its denial front and center. Without the idea that we have entered into a New Climatic Regime, we cannot understand the explosion of inequalities, the scope of deregulation, the critique of globalization, or, most importantly, the panicky desire to return to the old protections of the nation-state – a desire that is identified, quite inaccurately, with the “rise of populism.”

To resist this loss of a common orientation, we shall have to come down to earth; we shall have to land somewhere. So, we shall have to learn how to get our bearings, how to orient ourselves. And to do this we need something like a map of the positions imposed by the new landscape within which not only the affects of public life but also its stakes are being redefined.

Secara jenaka (ironis), Latour menggarami lautan dengan berseru,
“Here is something that adds an unexpected meaning to the term “postcolonial,” as though there were a family resemblance between two feelings of loss: “You have lost your territory? We have taken it from you? Well, you should know that we are in the process of losing it in turn …” And thus, bizarrely, in the absence of a sense of fraternity that would be indecent, something like a new bond is displacing the classic conflict: “How have you managed to resist and survive? It would be good if we too could learn this from you.” Following the questions comes a muffled, ironic response: “Welcome to the club!””

Acknowledgment:
The image of the book is retrieved from
https://encrypted-tbn3.gstatic.com/images?q=tbn:ANd9GcR2b6MEZO1JV_dTL1cNwXb8ehvJmmpfInlVqIsQiTDKSQbsYD_P 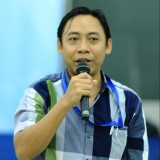